Very excited to have received an advance copy of my new book, The Fourth Amendment in Flux: The Roberts Court, Crime Control, and Digital Privacy,  just published by the University Press of Kansas.   UPK is one of the top publishers in political science, and seeing the book in print is very cool.      The book was the culmination of ten years of study of the Fourth Amendment, and two years of research trips to the Library of Congress.   The book should be available on Amazon on May 24th. 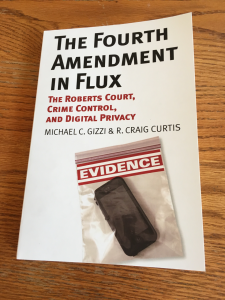 Here is a basic description:

When the Founders penned the Fourth Amendment to the Constitution, it was not difficult to identify the “persons, houses, papers, and effects” they meant to protect; nor was it hard to understand what “unreasonable searches and seizures” were. The Fourth Amendment was intended to stop the use of general warrants and writs of assistance and applied primarily to protect the home. Flash forward to a time of digital devices, automobiles, the war on drugs, and a Supreme Court dominated by several decades of the jurisprudence of crime control, and the legal meaning of everything from “effects” to “seizures” has dramatically changed. Michael C. Gizzi and R. Craig Curtis make sense of these changes in The Fourth Amendment in Flux. The book traces the development and application of search and seizure law and jurisprudence over time, with particular emphasis on decisions of the Roberts Court. 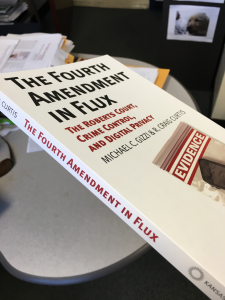 Cell phones, GPS tracking devices, drones, wiretaps, the Patriot Act, constantly changing technology, and a political culture that emphasizes crime control create new challenges for Fourth Amendment interpretation and jurisprudence. This work exposes the tensions caused by attempts to apply pretechnological legal doctrine to modern problems of digital privacy. In their analysis of the Roberts Court’s relevant decisions, Gizzi and Curtis document the different approaches to the law that have been applied by the justices since the Obama nominees took their seats on the court. Their account, combining law, political science, and history, provides insight into the courts small group dynamics, and traces changes regarding search and seizure law in the opinions of one of its longest serving members, Justice Antonin Scalia.

“A significant contribution to the literature on Fourth Amendment jurisprudence that is written clearly and concisely. It should be read by legal scholars and students, and anyone with an interest in how law enforcement interests collide with the privacy rights of citizens.”

“The Fourth Amendment in Fluxis an excellent book for political science, pre-law and criminal justice students.”

At a time when issues of privacy are increasingly complicated by technological advances, this overview and analysis of Fourth Amendment law is especially welcome—an invaluable resource as we address the enduring question of how to balance freedom against security in the context of the challenges of the twenty-first century.