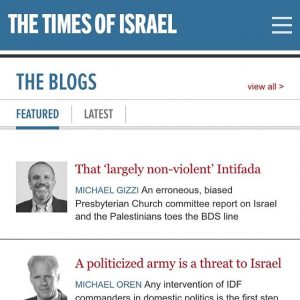 Since May, 2016, I have been blogging for the Times of Israel, a major online English-language newspaper published in Jerusalem, with an audience in both Israel, the United States, and Europe.  I write on peacemaking issues, as well as the Boycott Divest Sanction movement.

The Presbyterian Church, BDS, and that ‘largely non-violent’ First Intifada

Co-existence efforts and grassroots interaction as a foundation for peace