Tonight I had the opportunity to experience a different effort aimed at reconciliation in Israel, one which contradicts common images.   For all its security, the Israelis have a long tradition of providing medical care to children in need, regardless of where they are from.  Borders don’t matter.   In Tel Aviv, there is a hospital, called Save a Child’s Heart, that is world famous for its congenital heart care.   In Jerusalem, there is a christian organization called Shevet Achim, that provides a shelter for families with children needing care at Save a Child’s Heart.   They began by working in Gaza, and the West Bank, but now provide a place for families from Syria, Jordan, and Iraq (maybe others).   The organization is kind of like a Ronald McDonald’s House, but on a global scale.   What makes the group unique, is that it is a group of staff and volunteers who live together in community.   They share a home on “Street of the Prophets” (Ha Nevim Street), and have a few apartments down the road from it.  It is a small old building.   People come and work for a week, or a few days, or a few months, or longer.   Tonight there were people from Scotland, Denmark, Germany, the US, and elsewhere.   There was also a father of one of the children, a Kurd, from Northern Iraq at dinner at the end. 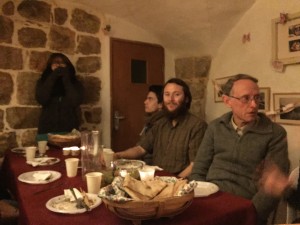 They start each day with worship together.  They are non-denominational, and seek to build christian community in the purest sense.  They don’t fight or argue about doctrine, and when someone comes who wants to argue about theology, they usually don’t stay.  They actually spend 2 hours each morning in worship and scripture study, then go do the work of the day.  They eat their meals together (although some of them are off-site), and eat dinner in community.

I learned of Shevet Achim from my Presbyterian friend George Douglas.  George had come across them on some of his trips to Israel, and he strongly encouraged me to spend time with them.   George and his wife also decided they wanted to treat the community (who normally eat very simply), to  full feast – a mediterranean kebab dinner.   So tonight, I went, and had a chance to meet with the community and share a meal with them.

It was after dinner while engaging in casual conversation that the small world I described in my Facebook happened.  I asked Jonathan, the director of the community, where he came from.   I knew he had come to Israel in 1990, but I was curious where he was from.  He said, I moved around a lot, but mostly grew up in upstate New York. 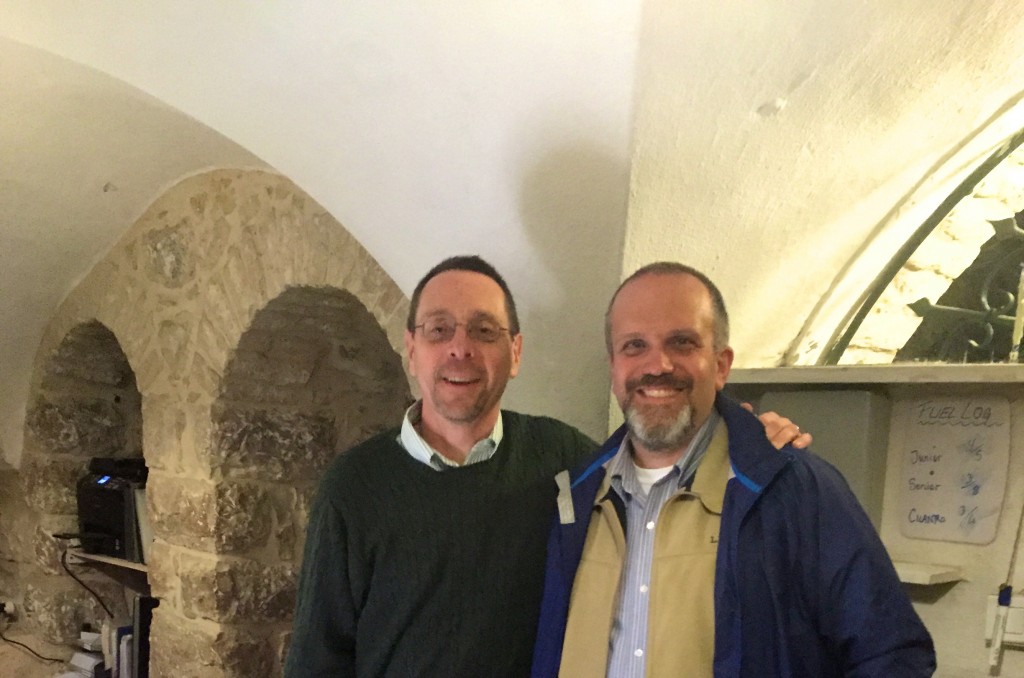 This piqued my interest.  Where?   He replies, “Albany.”

“I am from Albany, Colonie actually.”

Jonathan: “I graduated from Colonie Central High School in 1979.”

Me:  I ran cross country.

Jonathan:  “I was also the editor of the newspaper.”

Me: Holy…  I was the editor of the Sandscript. Co-editor, actually.

Me:  “Where did you go to college?

Me:  I went to grad school at SUNY Albany.

Yeah, that happened.  6,000 miles away from home, in the Middle East, at a Christian community in a several hundred year-old building in Jerusalem on the Street of the Prophets.   We were both really really taken back by it all.  Sometimes, those types of connections mean something.  Who knows.   Right now, I am writing about it, and I encourage you all to check out Shevet Achim. Learn about their community and see how you could make a difference, by sponsoring a child. Or share the info of what they do with others.