We left the studio this morning at 7am, and returned at 9pm.   It has been, like every other day, a whirlwind, but this one more than others.   Let’s start with the Shimon Peres Center for Peace.    We arrived at 8:15am in Jaffa, after a 90 minute drive in Tel Aviv traffic (Roger is a champ, and is a great driver, I served as navigator!).   The Peace House is a post-modern building built on the Mediterranean Sea, in the oldest continuous port city in the world, Jaffa.  Our host was Nadav Tamir, former Consul General for Israel for New England, and senior policy advisor to former President Shimon Peres.  (Peres is 92 years old, by the way, still works at the Peace Center he built, and left office as President of Israel last July). 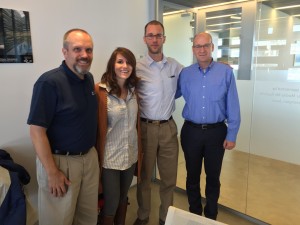 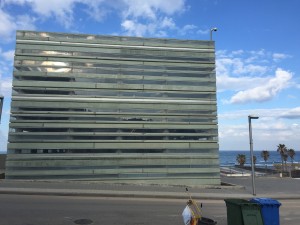 Nadav and  Adina Vogel, Coordinator for Development and External Relations, spent more than an hour discussing the three main projects that the Peace Peace Center engages in, then spent another hour giving us a tour and answering questions.   The Peace Center has three primary functions. First, they provide medical training for Palestinian doctors and medical staff in the West Bank and Gaza.  The Palestinian Authority has been separate from Israel’s medical health care system since 1999, and their medical systems are nowhere at the level of the Israeli’s so they have provided training to more than 300 doctors.   They have also provided health care for sick Palestinian children.  50 percent of the Palestinian population is under the age of 14, and their Saving Children program has treated more than 10,500 children.

Their second endeavor is Business and Environment.  They bring business professionals from Israel together with businesses on the West Bank.  Last year,in June, after the 3 Israeli children were kidnapped (and later found killed), they held a Palestinian Product Exhibition in Nazareth, where 1,000  B2B meetings were held.  500 people attended, and 40 Palestinian companies were there.   THIS IS what Positive INVESTMENT in Palestine, and NOT DIVESTMENT from Israel is.   They are taking steps for Israeli companies  to see the business opportunities in the West Bank.

Third, is the Peace Education Program.  This is multi-faceted, and is based on the idea that within conflict resolution it is easy to develop stereotypes, and children and youth are the future.   So their goal is to breakdown those stereotypes.  They do this in a variety of ways, ranging from sports programs that bring Jews and Arabs together, but add in a peace component to the programs.  They play football (soccer, of course), but they do it with different rules.  You have to pass the ball to a member of the other group on your mixed team.   They work with communities in Arab Villages in Israel, and on the West Bank.  They develop a twin school program, where two schools are paired together.   This targets kids.

The YaLa program targets 18-35 year olds.  It is a Facebook page movement, which specifically integrates people across Israel, the West Bank, and other nations in the Middle East and Northern Africa.  They use social media in private groups, and include online courses provided by American universities (what a great idea for a peace studies course — let’s develop a peace study curriculum we can provide for Israeli’s and Palestinians!)  As of now they have 300 participants, who meet regul

arly online using Facebook, and other technology tools like Google Hangouts, then have face to face meetings.  Participants are mostly in their 20s, and come from the West Bank, Gaza, and Israel.   They even had a participant from Gaza who lost two family members in the war, but felt that it was essential to participate in the program.

Nadav and Adina were extremely generous and told me they would gladly host Illinois State students.   But the thing that really struck me was how they were working for positive investment, and were providing tools to cut across the narratives that people get locked in when talking about Israel and Palestine.  We can not simply ACCEPT one narrative.   We have to look at the underlying dynamics, and try to see what the narrative assumes, and realize there are competing narratives.

It was important to discuss what was bothering us, but we have to move forward, because we came here to be friends and not to fight, if I don’t agree with the other side, it is game over.  We have to learn to accept and love one another through our differences.

This reminds me of the words I have used when giving a sermon on interfaith issues at New Covenant Community and Moses Montefiore Temple.  “the supreme religious challenge is to see God’s image in one that is not in our image.”  Rabbi Jonathan Sacks’ words capture why interfaith work is important.   That young Israeli student captures how it applies in the context of conflict resolution, coexistence, and reconciliation in Israel.