Today marks my last day in Israel.   I had a very important meeting scheduled with the Shalom Hartman Institute, that we had to makeup from a cancellation due to the snow storm.   Sadly this meant I could not get to the Hadassah En Kerem Hospital to learn about how they provide treatment for children and people from all over the world, but I think I have a good sense of what they do, so I am good with it.

I took advantage of warm weather and blue sky for the first time in about a week to do an early walk to the Old City one last time. I went first to the Western Wall. There is just something about that place which draws me back, again and again. I went to the Archeological Park, adjacent to it, where they have excavated the corner of the second temple, and even excavated a first century Jerusalem street that was adjacent to the Temple Mount wall, and other ruins that date back to the first temple era.   I’ve said it before; I love ancient rocks.   When I finished that I noticed the line for the Temple Mount was short, so I went back up to see the Dome on the Rock again, this time with sunshine and blue sky. I made for some nice photos. I exited out the north gate, and headed east to the Lions Gate. From there I went back to the Garden of Gethsemane, and was going to go up the hill of the Mount of Olives to the Church of Mary Magdalene, but my feet told me this was not a good idea. I made it back through the Old City, which was bustling unlike at any other time in my trip, and grabbed a snack, and then walked about a mile or so to the Shalom Hartman Institute. 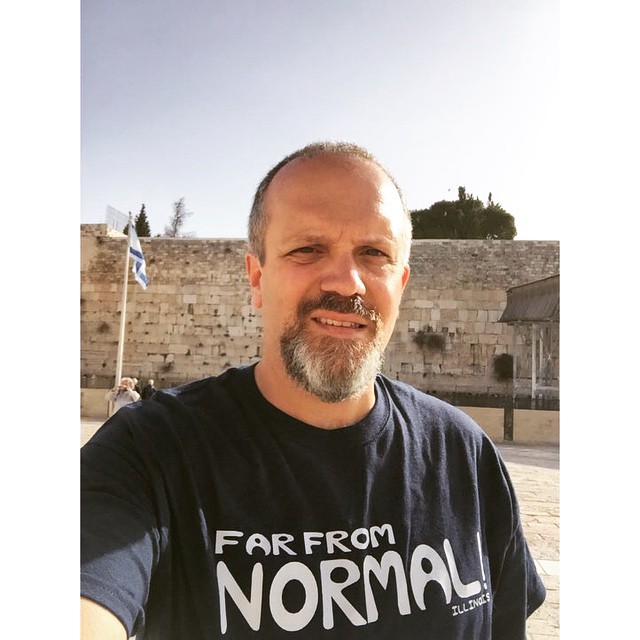 Before talking about Shalom Hartman, I must say I was kind of surprised by my willingness to just walk in city neighborhoods in a global city I didn’t even really know. But it was nice out, and the neighborhood were all quite nice. Indeed, I had to detour around one street, because there were security barriers – I was in the neighborhood of the Prime Minister’s residence. I thought about seeing if I could see Bebe, but he is in the US I think, getting ready to create a stir in the House of Representatives.

Shalom Hartman was recommended to be by both Rabbi Lynn, and by my friends in the Jewish Federations of NY.   It is basically an academic think tank, the equivalent of the Brookings Institution, but it also provides a variety of research and educational programs. It will be the perfect type of place to bring ISU students. I spent time with two people, including the woman who organizes curriculum about Judaism for both Christian groups and for academic trips. This was valuable, and I now have access to some very good curriculum that the PGR Interfaith Group can make use of.

Tonight I check out of the hotel (I reserved the room through tomorrow, since my flight is at 1am, an it was a mere $100 for a night), and take a shared taxi to the airport in Tel Aviv. I am told to be there 3 – 4 hours in advance, as the security leaving the country is unlike anything I have ever seen.   I’ll fly from Tel Aviv to Paris at 1am, arrive in Paris at 5am (6am Jerusalem time), then have a 10:30 flight back to O’Hare. If all goes well, by 2pm I’ll be back in the good ole USA, and heading home with Julie. I am ready to be home.

I loved everything about this trip. I expanded my horizons, I learned about different narratives, I saw things that people dream about. I was able to spend time with those very special kids from Friends Forever, and make new friends, including Raed, Evanna, and Rida. Roger and I had adventures that we’ll never forget.   I had deep conversations about all that makes up this beautiful yet complex land. I spoke with secular jews, with religious jews, with Israeli Arabs, with Palestinians on the West Bank. I had productive meetings with the mayors of Nazareth and Nazareth Iliit. I made a good friend from Barcelona and enjoyed an evening making sense of all of this; I discovered a small world connection, and I collected a lot of information that I can use to plan a peace studies study abroad trip, and hopefully a Presbytery of Great River’s trip as well. It will take a long time to decompress, and sort it all out. I have more to write, both in my blog, and for Presbyterians for Middle East Peace. I look forward to reporting back to President Dietz and Dean Wood, as well as the Office of International Studies programs.

Shalom for now.   Catch you on the other side of the Atlantic. 13 hours of travel across 8 time zones, and more than 6,000 miles to go.