Today was a great day.   We got up and went to have meetings with the mayors of Nazareth Iliit and Nazareth to discuss a possible sister city program.  Both meetings went extremely well.  We started in Nazareth Iliit, where we met with the mayor, the city manager, and the education department manager.   The mayor was a Russian Jew who did not speak English, so most of the conversation was with the others.  They are in financial crisis (like Illinois), but want to find a way to build cultural connections between our cities by starting with schools.  The idea is to use technology to have exchanges between kids in schools, and then to work to send kids over to the US, and vice-versa.   In Nazareth we met with the mayor’s chief of staff and the superintendent of the school district (with 27,000 students).  Their mayor does not speak much English, but was very supportive and gave his chief of staff authority to make this a reality.   He in turn told the superintendent of schools to do what she has to do – to do the same types of things that Nazareth Illit wants to do.  She was very friendly and wanted me to send her a document of what I proposed and to have a meeting again before I left.   I need to slow that down, as while we have support from our mayors, we have not gone any further with this.  But I left feeling that I accomplished my goals, and there is a good chance to move forward. 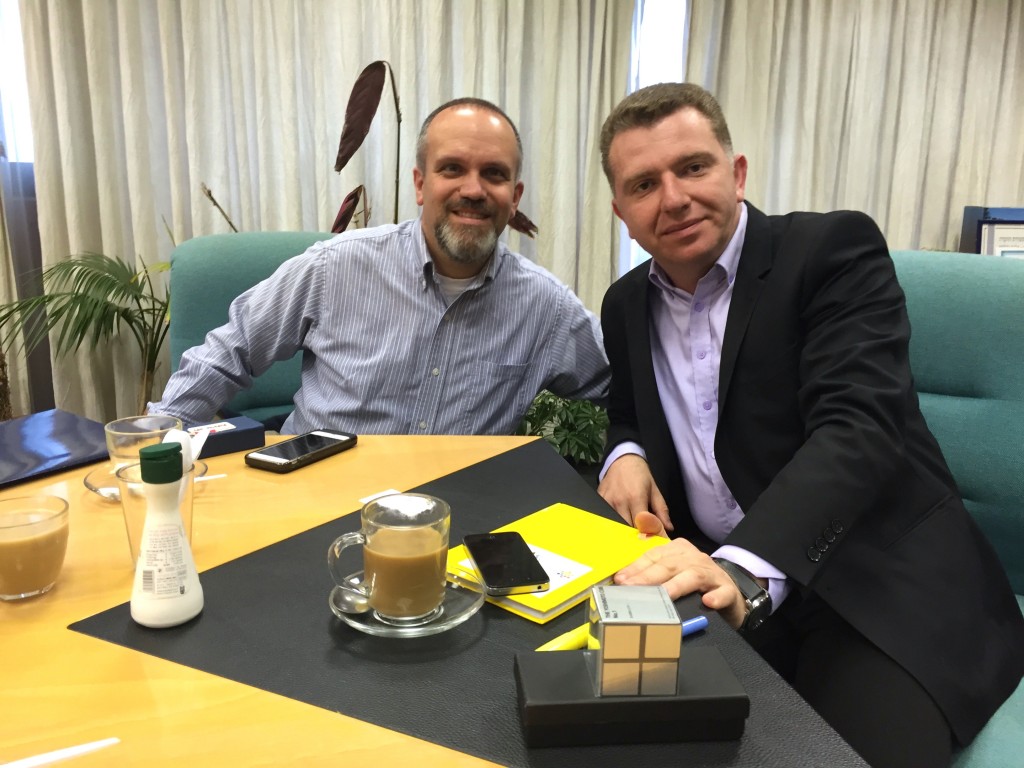 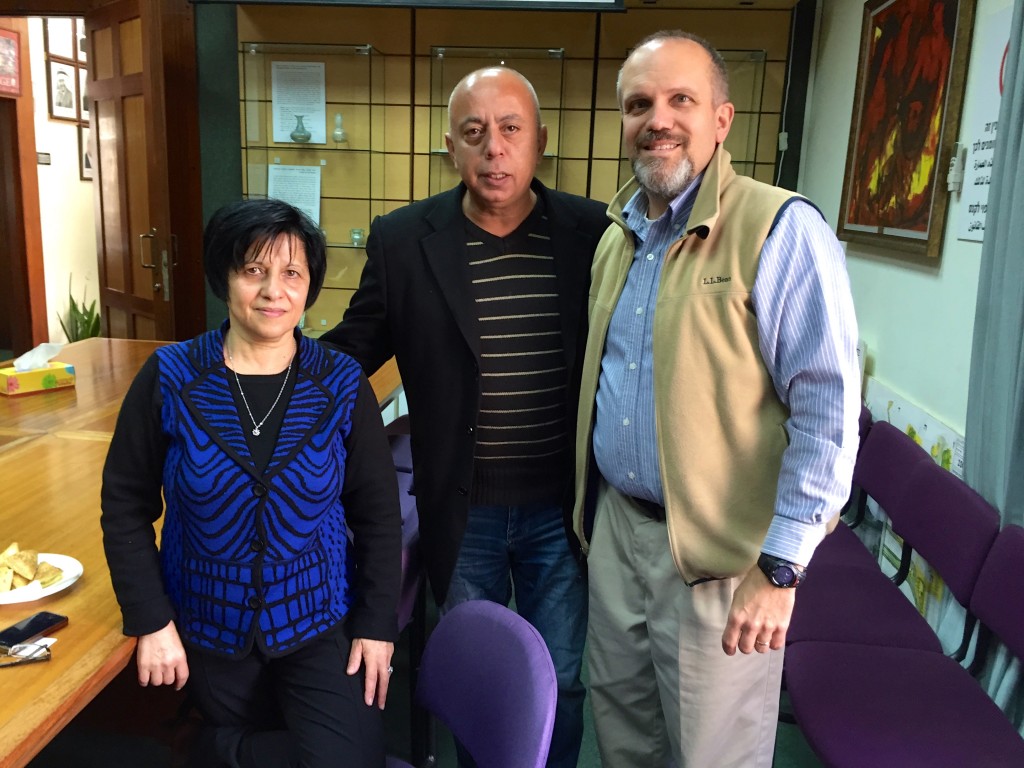 We then stopped at the Basilica of the Annunciation in Nazareth, the historic site where it is believed Mary lived and the angel told Mary she was going to have Jesus.  The church is a huge building, one of the largest in the Middle East, built on top of ruins of caves and part of the original Nazareth village.  I really enjoyed this, and as I told my friend Gregg on Instagram when posting photos, old Catholic roots took over and I did the sign of the cross with holy water.   Seemed appropriate.   We both really enjoyed seeing the church, and then we ran into our friend Bashar Daher, one of the teacher’s from Friends Forever who we ran into on the street.  We spent some time with him, and then headed off with Raed for lunch at a falafel place.  Very good. 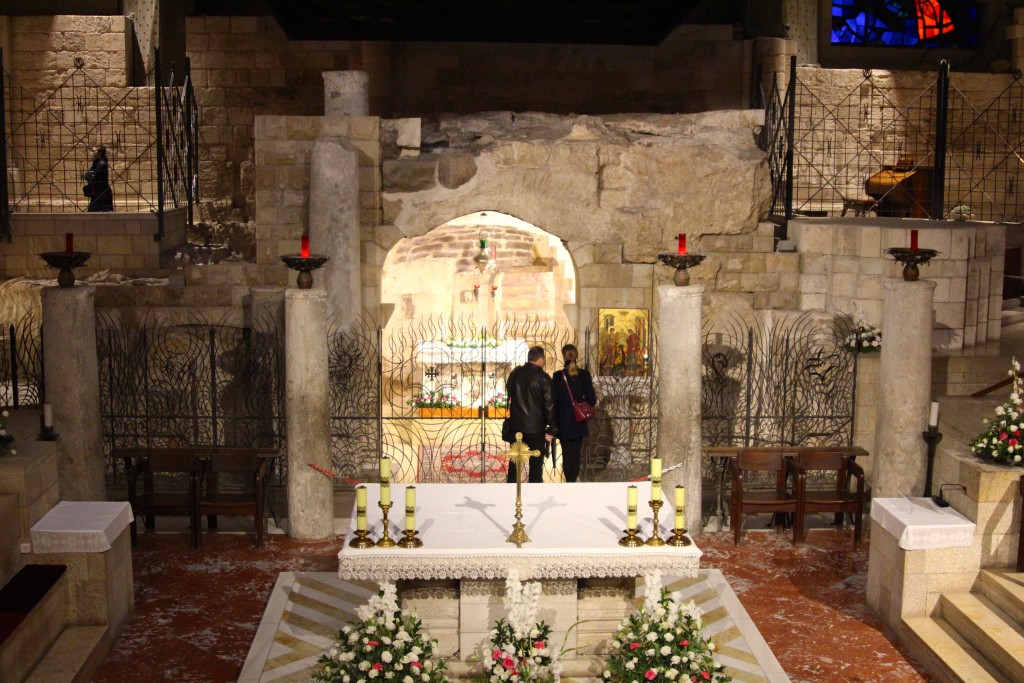 That’s when things got crazy.  We stopped at Avis to rent a car, but managed to NOT have made a reservation and there were no cars from either agency in town.   So, we called trust-worthy Raed, and he arranged to have one of his teachers pick us up and drive us to Yagur, in Haifa.  We made it just in time for our meeting with the other half of the Friends Forever delegation from this year.

We visited in the Carmel Zvulun school with the five teens for about an hour.  Once again the reunion was wonderful.  And it was so nice to spend time catching up with the kids.  We then walked together to Kibbutz Yagur, and received a really interesting tour of the history of the Kibbutz.   Yagur began in 1922, and is a collective in the classical sense of a Kibbutz.  All of the members live in community.  They share breakfast and lunch in a dining room, there are two kibbutz factories, and those who work outside of the Kibbutz contribute their income to the whole.  Most of the people were born into it or married into it.   We also learned that until the 1970s children lived not with their parents, but in the family center, and only saw their parents for the “hour of love,” (which was actually about 4 hours, from 4 – 8pm each day). The lived and slept in the dormitories.   Interesting!    The kibbutz has about 1500 residents and is certainly an idealistic living arrangement.  It is so very un-American, yet very intriguing.  And I will definitely bring students to visit it when I do the study abroad trip.

Then Roger, Stephen Martineau (Friends Forever’s executive director, who is in Israel this week to join us), our host Evanna (one of the teachers from Carmel Zvulun and a leader in FF), and her school principal Mira went out to an asian restaurant in Haifa.   I was immediately struck by how Western Haifa is and by how modern the city compared to Nazareth and the Galilee.  We had a great dinner, then drove through Haifa, up the mountainside, and managed to find a museum where the Carmel Rotary was meeting, so Roger could present a rotary banner to their club, on behalf of Sunset Rotary.   They were doing a student debate, so we watched six students give speeches in Hebrew.  I caught some words, but not many.  But it was fun, and when they did the ceremony exchanging banners, they assumed I was also a rotarian, and gave me them too.   I will present them to President Dietz on behalf of their club to the Normal Rotary. 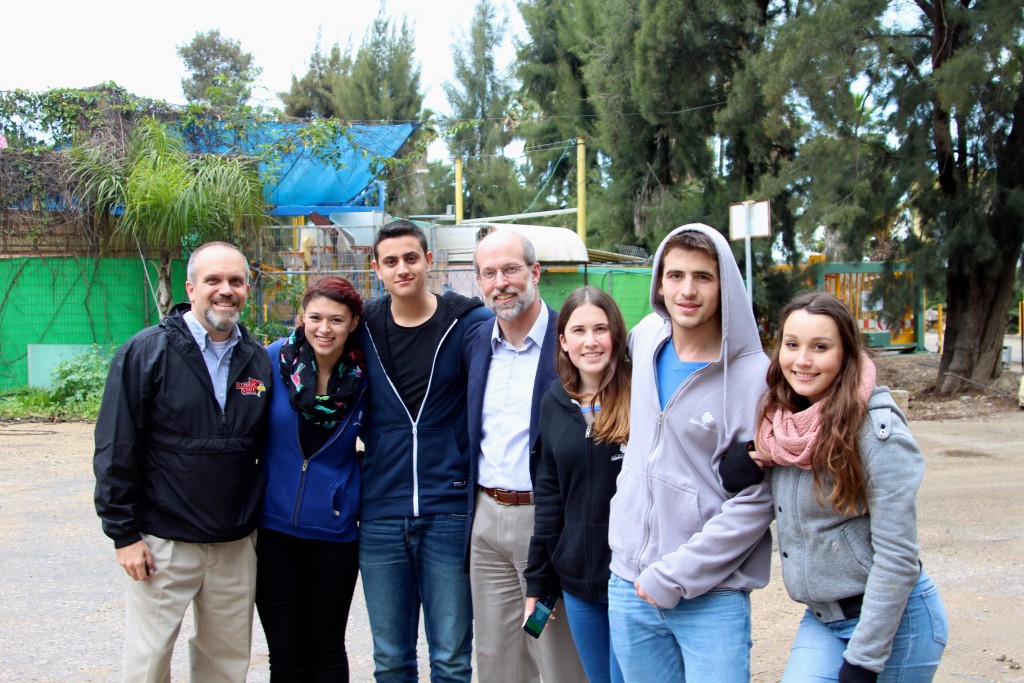 And now, the day ends in Ein Hod, a beautiful artist colony on the Mediterranean Sea.  Roger and I are staying in a visiting artist studio, for the next three nights, as the guest of Evanna.   It is beautiful.  Look for incredible pictures tomorrow.   I can’t really fathom that I am within half a mile of the Med.   Yeah, this has been a tough trip so far.  But somebody has to do it.

Tomorrow morning we will explore the Artist Colony, then meet Evanna and drive to Caesaria, to visit the ancient Herodian port and ruins, and then visit a Druze village, before meeting with the faculty at the University of Haifa Peace Research Center.   Life is good.   Time for sleep.   Photos are uploading to two albums, I’ll share them in the morning.