This is the first of several posts in which I will expand on what I wrote while I was in Israel, and make better use of the thousands of photos I took, to tell the stories I learned.  In many ways this is curriculum development, but it is also a way to more fully explore Israel.

Bethlehem and “the Wall”

I visited Bethlehem on February 21, 2015. It was the first stop on a day-long drive through the West Bank.   The first stop in Bethlehem was what is known as either the Separation barrier, Security fence,  the Occupation Wall, or the Apartheid Wall.  It depends on the perspective that one has.  The “wall” went up between 2003 and 2006, and is attributed with dramatically decreasing the number of terrorist attacks in Israel.  That said, the Wall is very controversial.  It isolated Palestinians, and only 20% of it is actually on the “Green Line” or 1949 cease-fire borders established by the United Nations.   Palestinians claim it increased Israeli control over areas of the West Bank, while Israel claims the wall’s location is to maximize security. Both claims have merit.

While described as a “wall,” only about 5 percent of it is an actual concrete wall -the majority of it is a multi-layered fencing system, with barbed wire. It is the “wall” which is most recognizable to outsiders. 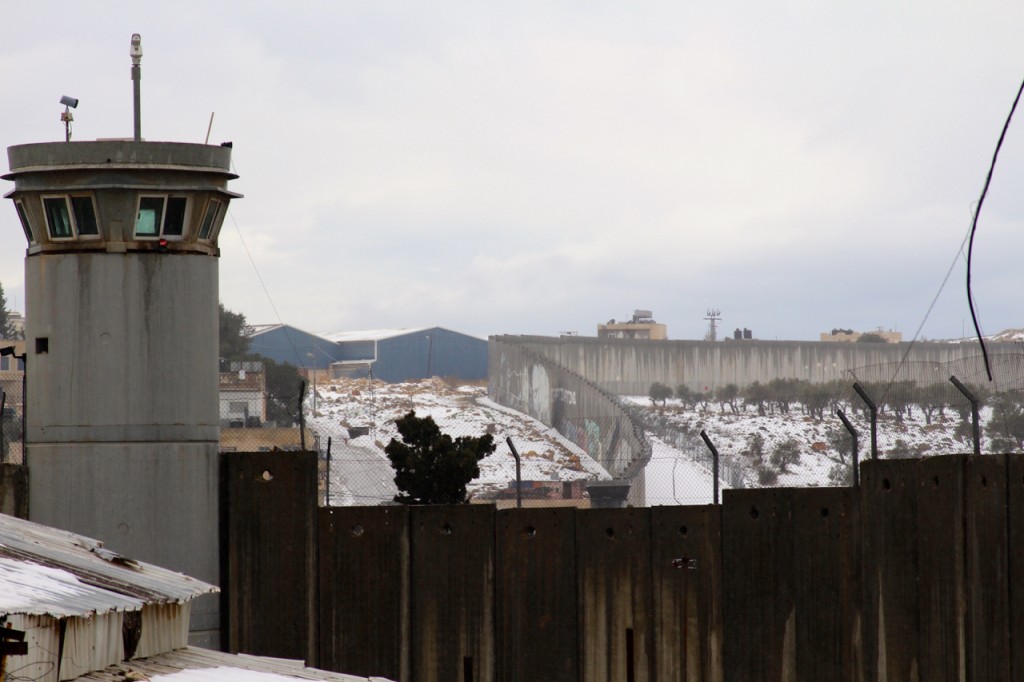 The security barrier was designed by an architect named Danny Tirza.   The photo-journalist Branden Harvey recently interviewed Tirza, and this is what he had to say:

From the beginning, Danny says his final goal was peace. He built a barrier across 451 miles and didn’t destroy or evacuate even one Palestinian home. He routed the wall to be sensitive to its effect on communities, even building special gates for farmers or people visiting certain religious sites and special roads for Palestinians and Jews who need to reach certain communities.

He met with local Palestinian officials, Israeli officials and foreign officials, seeking as much wisdom as possible. Danny was so intent on drawing the lines in the right spots (or least worst spots) that once when he struggled to figure out exactly where to draw the line around a number of Palestinian Christian communities, he flew out to the Vatican to work toward a solution with top officials and bishops.

Again and again, Danny would reiterate that he didn’t build these walls to stay up forever. He built them to create and encourage peace. And when peace is here, he want to be the first one to start breaking down the walls. In fact, in every segment of the wall, there is a hole in the top. This is so that “it will be easy to remove the wall when the time comes for peace.” Peace is Danny’s final goal.

Whether Tirza’s personal beliefs represent that of the government, of course, are two different things, but it is one perspective.   Another one occurs on a board outside Manger Square in Bethlehem, called “The Tourist Guide to the Occupation.” A part of this sign describes the wall quite differently. 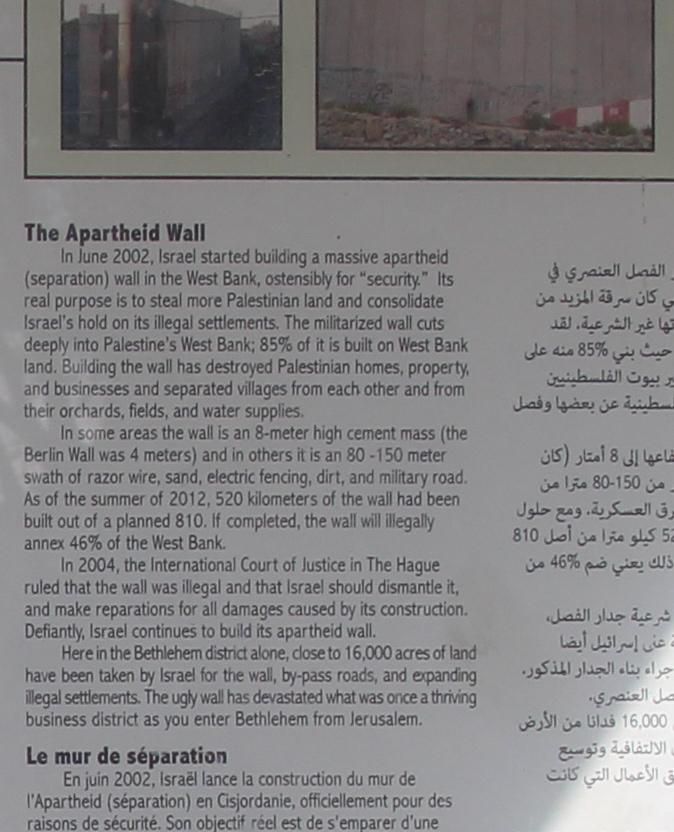 I present both sides of the argument — “peace wall” vs. “apartheid wall” to illustrate the power of narrative, but also to point out that while the barrier may have saved lives, it is the single most visible sign of “occupation.”   I would hope that Danny Tirza’s dreams will come true, but I have to say, I don’t see it happening easily. 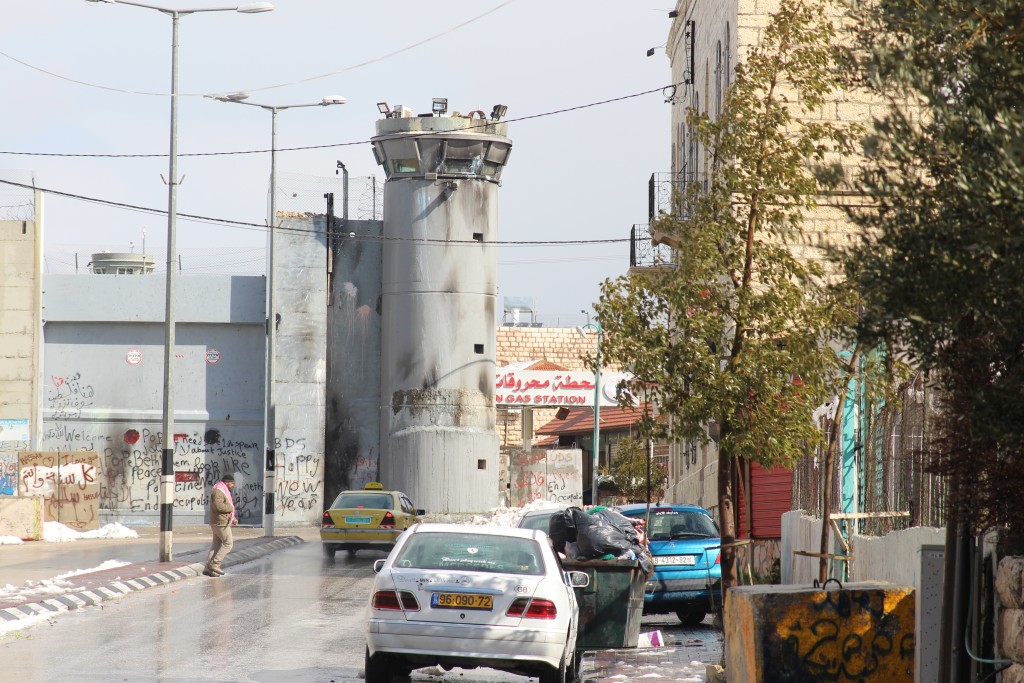 The wall also has a significant amount of graffiti on it.  Graffiti in the form of political propaganda.  Here is one piece, which quotes the Hebrew Prophet Amos, “Until Justice Rolls Like Water, And Righteousness Like a Mighty Stream.”  The same words were used by Martin Luther King, Jr. in Montgomery in 1955 at the start of the civil rights movement in America.  That spoke volumes to me. 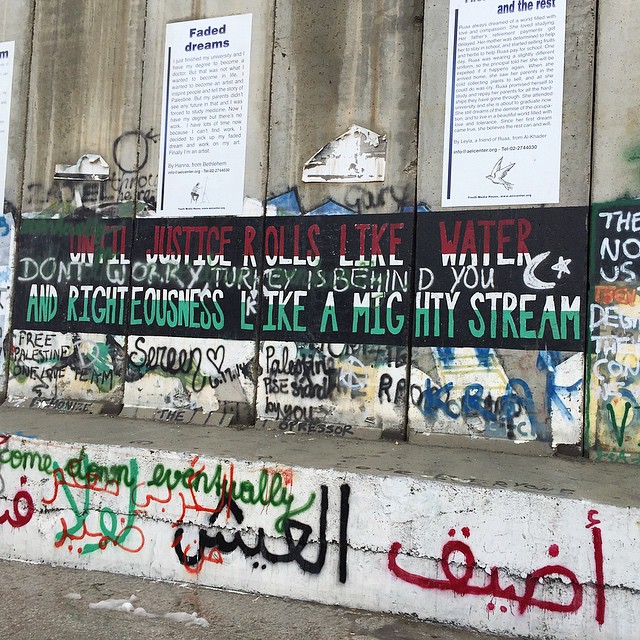 Danny Tirza spoke about the graffiti in his interview with Branden Harvey, where he said:

“We had all this bad graffiti on the wall. Mostly just bad art. It’s funny. I don’t know why all the graffiti is in English. We don’t have much graffiti in Arabic or Hebrew.At first, we tried everything to get rid of the graffiti. But when we painted over it, people would just put up something worse the next day.  We began trying everything to keep these walls clean. I even had some friends in New York who told me they have this special paint for the subways that graffiti doesn’t work with.So I went to New York, brought back this paint and painted the wall with it. I bought Palestinian spray paint and tested it out on the wall. It turns out Palestinian spray paint is especially good and still works on the walls.The more things we tried, the more I realized what living in a democratic country means. In a democratic country we let people share their opinions. Even with spray paint and graffiti. In Israel there is no law against it. And I’m glad there isn’t. I think it is better that people let out their anger against Israel through graffiti.” 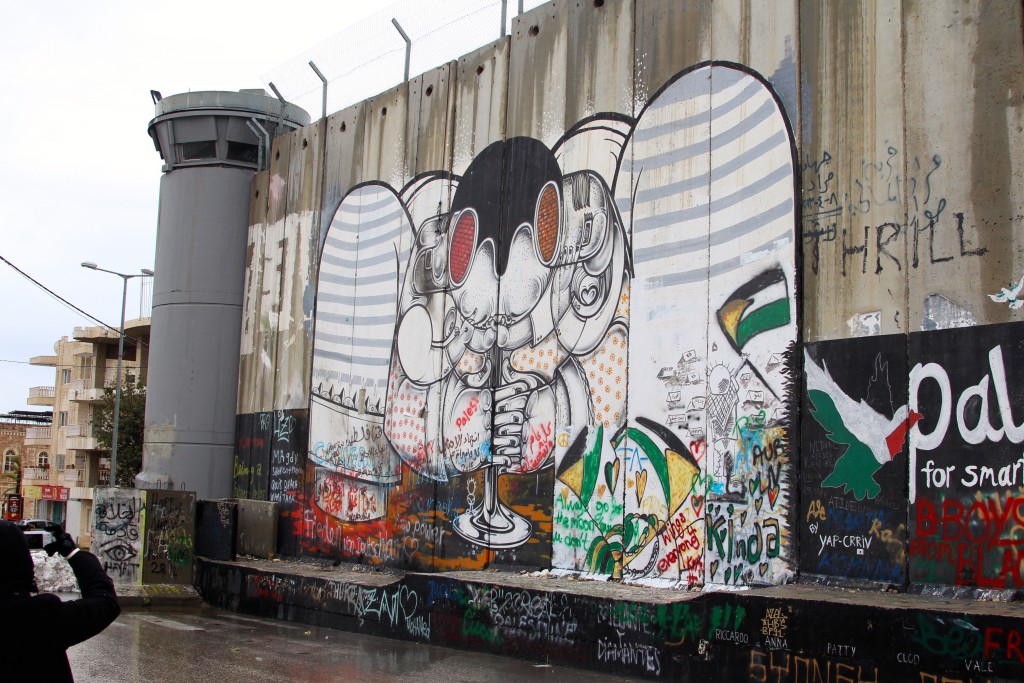 Bethlehem is the most visited city in the West Bank, given its proximity to Jerusalem, and more importantly, its role in early Christianity, as the site of Jesus’ birth as described in the Gospels of Matthew and Luke. Yet, it is definitely a very political city, and there are numerous signs of the conflict – if in little more than political messaging.  Some of this is in the form of art-work, like the mural on a wall, near the Separation Barrier, depicting a little girl frisking a soldier. Think about the message of that.   Change the girl to an African American youth, the solider to a police officer, and it would tell a story many in America would relate to. 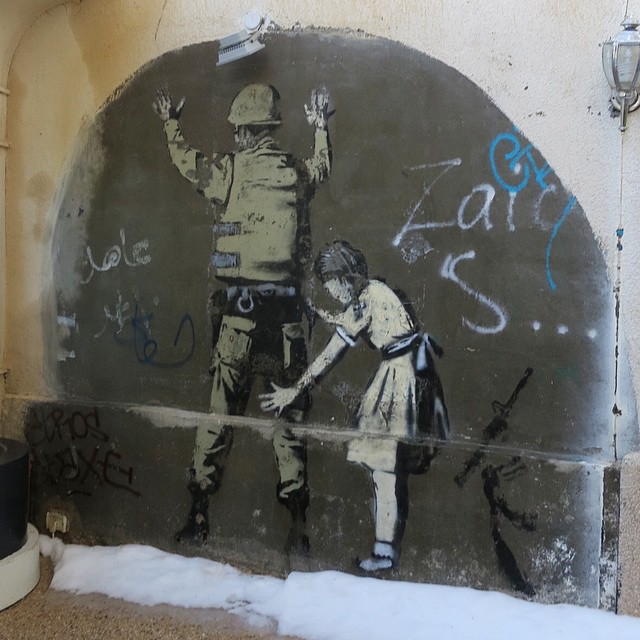 Here is another example — an explicit call for the boycott of Israel  (this is the ONLY time I saw anything encouraging the Boycott, Divest, Sanction movement while on the West Bank). 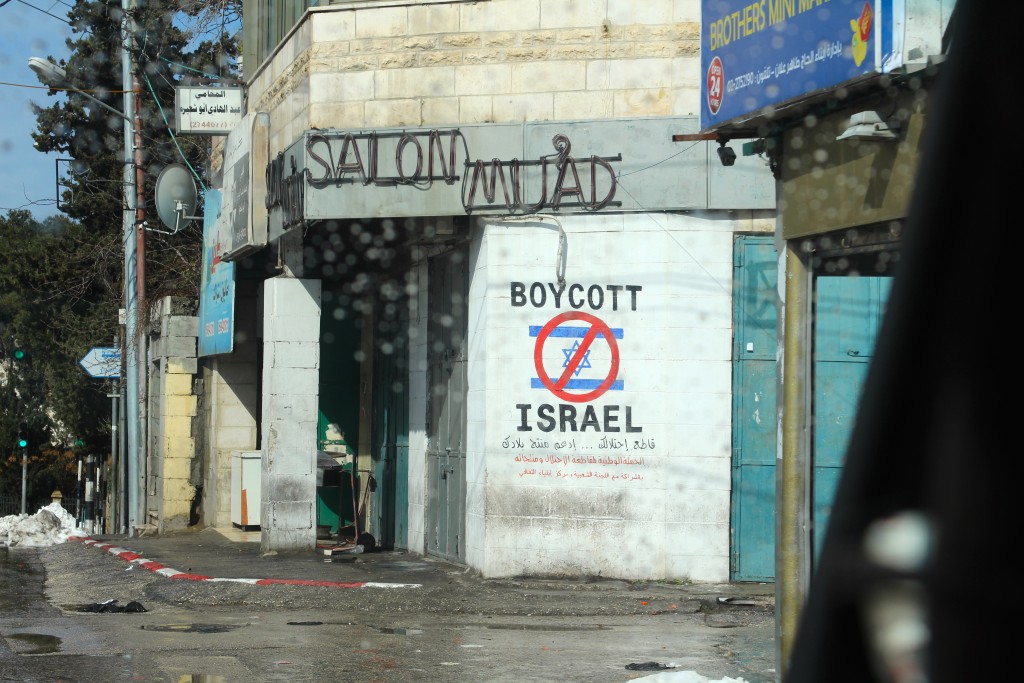 Here is a different sign of occupation.  When walking in downtown Bethlehem, this banner was hanging from a post.  The faces on the banner depicted Palestinians being held prisoner by Israel.  Are they terrorists? I have no idea, but our guide said they are political prisoners. 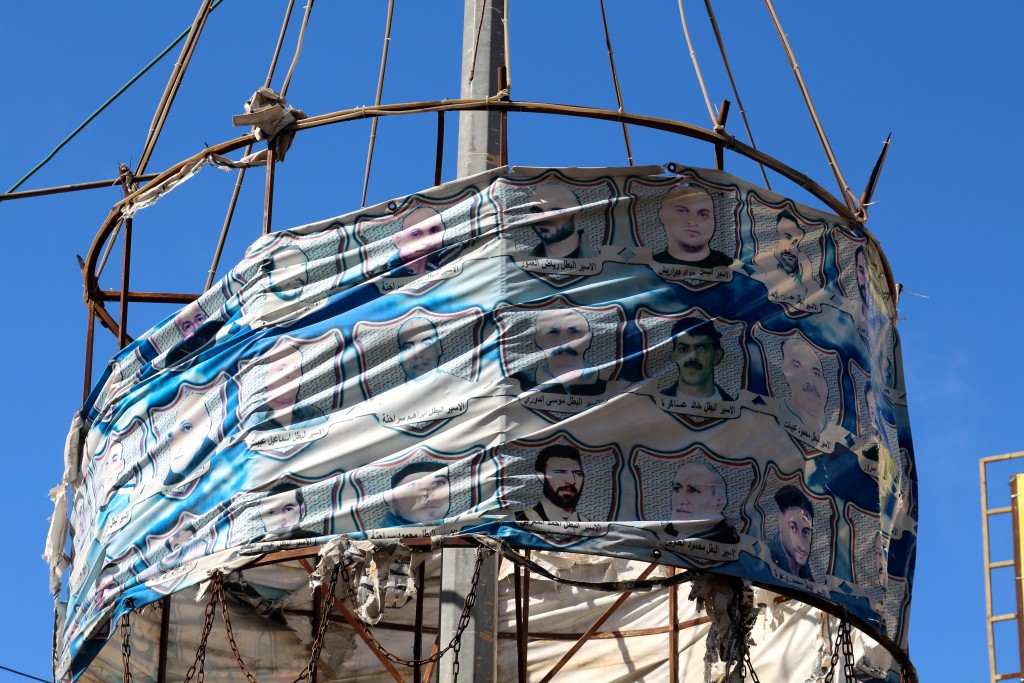 Other political elements of the city are less obvious.  Look at this photo.  It appears to be just another part of the city – and quite honestly looks like pretty much every West Bank town or village, complete with the tower of a mosque. 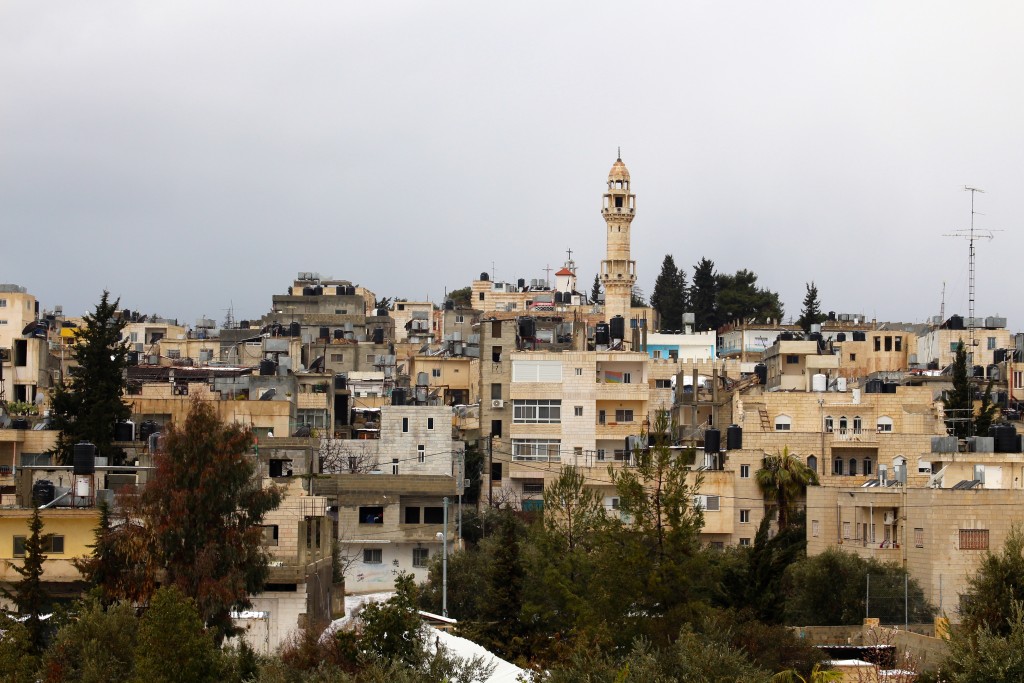 What you are looking at is actually the “Aida Refugee Camp,” built in 1950, to house Palestinian refugees who were displaced by the creation of Israel in 1948, and who abandoned their villages during the Israeli War of Independence / Palestinian Nakba.  I was kind of surprised when I saw it, because when I think refugee camps, I think tents in the desert.  Perhaps that is how it was in the 1950s, but today it looks like an Arab village.  There are 3,000 refugees living there, although I would guess that for the vast majority, Aida has been their home their entire lives.   The Aida “camp” is adjacent to the old Jacir Hotel, which is now the 4 star Intercontinental Hotel.

There are other signs of the conflict in Bethlehem, right in the city’s most popular tourist attraction, “Manger Square”  While walking outside of the Church of the Nativity, there was a big sign which I shared part of above, the “Tourist Guide to the Occupation.” This presents the Palestinian narrative, and utilizes some of the imagery (witness the maps), that are routinely used by the BDS Movement. 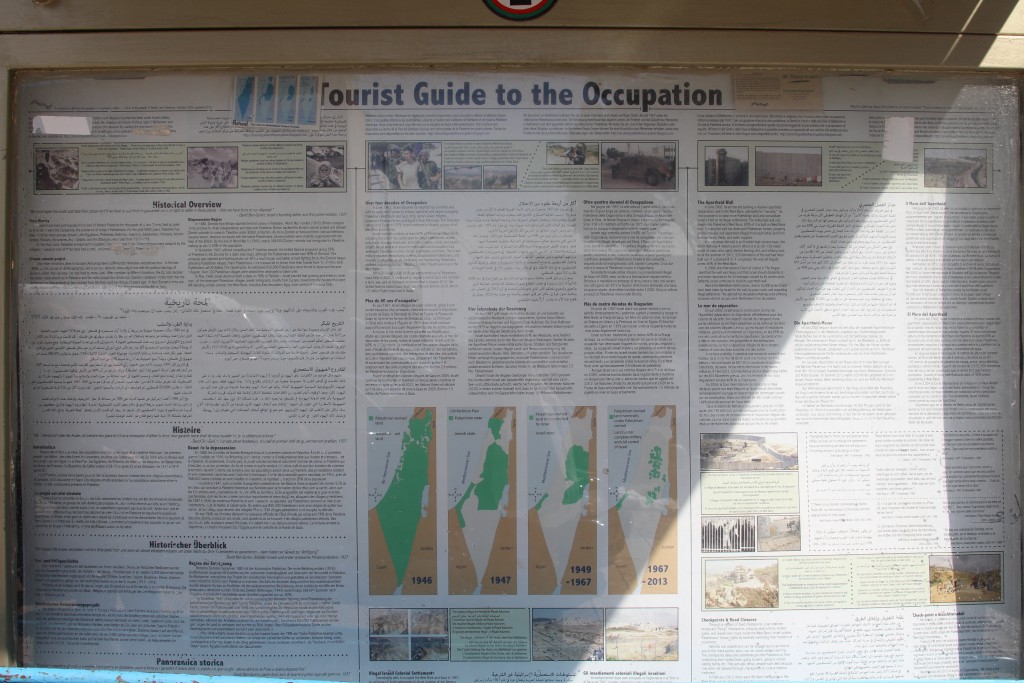 This is right next to the Bethlehem Peace Center, and the Church of the Nativity. 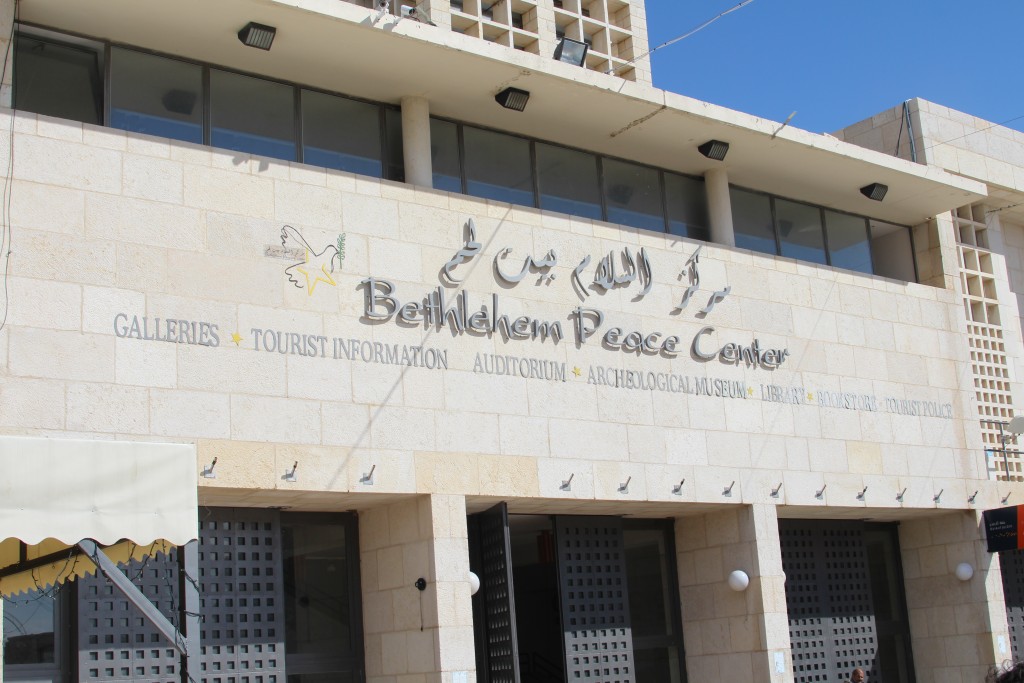 Some other scenes of the city