We arrived in Jerusalem yesterday and explored the old city in the rain.   Last night it snowed at least 5 inches, maybe more, and the entire city of Jerusalem pretty much shut down. This morning there were no restaurants open in the area of central city where we are staying, near King George and Ben Yehuda, but we figured we would find something in the Old City. We headed out, and walked down the middle of Hillel street, which was partially cleared, and made it to the Jaffa Gate. We had hoped to visit the Tower of David Museum at the Citadel. Alas, it was closed, but there was a Christian church and café open adjacent to it, so we managed to find breakfast. 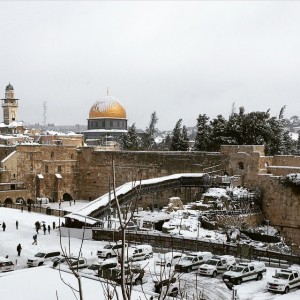 We then walked through the sluch to the Jewish Quarter and arrived at the Western Wall. It was busy – as today is Friday, and Shabbos begins tonight. The snow provided a very nice contrast to yesterday. When we first went to the Wall, the rain stopped; today the snow stopped and the sun even came out.   Someone told us that the sun comes out at least once a day in Jerusalem. I believe it.     It was there where I met two guys from Drake University in Des Moines, fellow Missouri Valley Conference schools. They were here to develop a study abroad class on diversity issues in Israel. I told them I was here to develop a peace studies class, and I suspected that was very similar. We chatted for awhile, and one of the guys was their Dean of Students. I will follow up with him when I return home.

We headed up from the Western Wall, to see if the Temple Institute was open (it wasn’t), but we met a college age student from Orange County who has been studying at the Yeshiva there for more than a year. 12 hours of torah study a day, five days a week.   He offered to bring us up to the roof-top of the dormitory to get a view of the wall and the Dome on the Rock. It was a spectacular view. And then we had snow-ball fights with kids on the adjacent roof-top.   Fun.

From there, we stopped at a gift shop, and then headed back to the Holy Church of the Sepuchlre, because in reading last night we realized we missed a bunch. I’ll admit, as someone who is interested in the historical Jesus, I find the idea that the last five “stations of the cross” occurred within the site of this couple acre church really a bit hard to believe. Everything is very close together. From the spot of the crucifixion, to the place where they prepared his body, to the burial spot.   I realize that when looking at religious sites like this, it is less about the historical truth than how the communities of Christians gave truth their witness. It isn’t important that THOSE are the exact spots, the fact that they have been a place of worship for centuries – even millennia – is enough.   But the church itself felt much more like a museum, than a church.

We then headed east towards the Lions gate, and on the way, found the first two stations of the cross, which were in a nice set of chapels. As we were headed out, the throngs of Muslims preparing for afternoon prayer were heading in, and as a result, it was very busy.   But we made it out to the Lions Gate, and set the Mount of Olives as our target. This worked out well. We went to the Garden of Gethsemane (which unlike the church described above), really seemed to fit – and be in the place where it would make sense for it to be; and the Church of All Nations.   This was very nice. 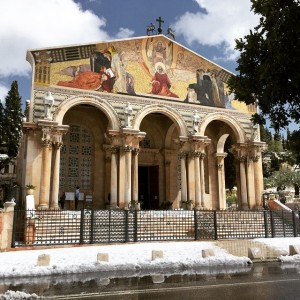 By this time, about 4 hours in, my trusty gore-tex water-proof Clarks shoes were taking a beating. They had kept me dry and warm all morning, but the sun was out and the snow was melting at such a pace, that it was pretty wet.   We walked around the Old City on the outside, and made it to the Damascus Gate (we tried to visit the alternate burial site (the Garden tomb), 3 blocks north of the gate, but it too, was closed.   So we headed back in, and found a “WC” J and had a decent lunch at an Arab restaurant that was open. From there, we proceeded back to the Jaffa gate back to our hotel.

The shoes have been blow-dried several times, and will recover, and all in all, I will say today turned out very well.   Jerusalem served us lemons, and we made lemon-aide.   Now, it will be even better if we can find restaurants open tonight with Shabbat beginning.

PS Internet is so slow, I have given up on uploading the full library to smug mug, until I get home.