I have learned in the seven days I have been here, that Israel operates on its own clock, not quite the same as in America. And to expect the unexpected.  Last night we were told that there was a snow storm coming that would likely close the roads in the city.  This was frustrating because we had planned to visit two peace organizations today – the Abraham Fund, and the Peace Center at Givat Haviva.   But we knew that if the roads closed, we’d be in trouble.   And we were kind of mentally exhausted from all that we had experienced in the first six days, so we made an executive decision and cancelled the meetings (Steve and Raed still traveled to Givat Haviva, and met, so I’ll get info from them), and headed to Jerusalem this morning.   We once again drove to Tel Aviv, and then headed east.

The road we took caught me off guard when I realized we were actually on an Israeli highway that cut through the West Bank.  The wall was on our left, and barbed wire fence on our right.  There were yellow signs saying where Palestinians could exit, and after the last exit, we went through a security checkpoint.  Drove through it actually, they were looking to make sure we had the proper license plate. 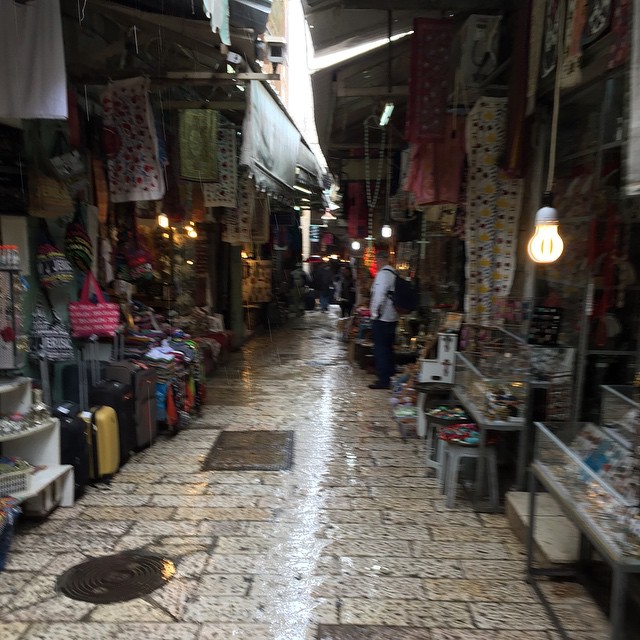 And then into Jerusalem.  I was the navigator, and this was more stressful than I expected.  But we made it to the hotel, but of course there was no parking anywhere nearby, so we made it to the car rental place, and returned the car.   Took a cab, and made it back to Center City.   I was happy that we were able to check-in to the room.  A decent sized suite, for less than $700USD for 6 nights.   By this time it was raining, but only lightly.  So we decided to walk into the Old City.  We entered by the Jaffa Gate, and the Citadel of David.  Each street is basically a souk – or market.   All the tourist stuff, all the bartering.   Fun to walk through, but not really stuff I want to buy much of, at all.   We wandered for awhile, and found the way to the Jewish Quarter, and the Western Wall.  To our luck, the rain stopped, and the sun came out.  The wall was truly impressive.  We walked up to it, and enjoyed the view.     We then walked into where the Temple Tunnel Tours are.  Our tour was booked for tomorrow morning, but we asked and they agreed to let us go today.    Th 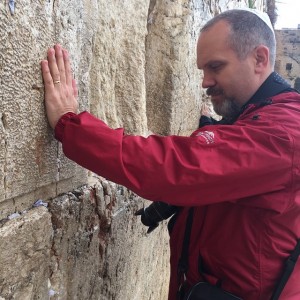 at was cool.  They have excavated 500m of the Western Wall, all under ground, right until the bedrock of the mountain.  The rock is identical to that outside.  And there is one piece of rock that is about 500 tons, 5 yards thick and about 50 feet long.  The Romans gave up trying to destroy it after the destruction of the temple.  Incredible.     At the end we walked on a first century street that they excavated as well.   Well worth while.

Once we exited the tunnels, we were in the Muslim Quarter, and on the Via Delarosa.  The Way of the Cross.   We followed the path, basically from station 3 until we reached the Church of the Holy Sepulchre, the believed site of the crucifixion of Jesus.   This church was unlike any other.  It felt more like a religious museum, with no markings to identify what you were seeing.  It was kind of surreal.    We spent a while exploring, and later I will use my Foder’s book to try to figure out what I saw.

By this time, the rain was no longer intermittent.  And we were wet.  To make things worse, when we exited the Old City, we made a wrong turn and ended up on King David Street, instead of Hillel Street.  Yeah, that was a major screw-up.  We walked probably an extra mile, in cold windy rain.   But eventually we made it back.

The snow hasn’t started, but our plan for going to Yad Vashem tomorrow has been changed.  I checked the website, and the museum closed at 12 today due to “inclement weather,” and has closed for tomorrow.  Sigh…   It has not even snowed yet.   As of now, the Israel Museum is still open tomorrow, so that is our first choice for the morning.  If not, we’ll try the Citadel tour of the Tower of David.  We might need to find some other inside opportunities. But I’ve learned to expect the unexpected.  So, c’est la vie!    And I am ok with a little down time tonight.   Seven full days into the trip, and I am more than a little tired.