Dueling narratives. Competing victim stories.   Cognitive dissonance. Surreal.   These are the words that capture a day spent in the second oldest city in the world, one of the most contested places in Israel/Palestine, and truly, a key home for monotheistic religion. Hebron.   A city of 350,000 in the southern West Bank, Hebron is home to the Avriham Mosque, the Abrihim Synagogue, and the “Tombs of the Patriarchs,” all in the same building – a mosque / synagogue built in the days of Herod, and a 1/10 scale re-creation of the second temple.   The caves underneath it are believed to house the tombs of Abraham, Sarah, Jacob, Isaac, Ruth, Leah – the patriarchs of Judaism and Islam. In Judaism, Hebron is the second most holy site after the Western Wall. In Islam, it is the fourth most important religious site. It is also a city that includes 11 Jewish settlements, including Avraham Arivu, which is right in the middle of the city.   Its mosque/synagogue is divided into a Muslim part, and a Jewish part. Neither have access to the other side, and according to the Hebron Wye River Accords of 1997, Jews have full access to the building 10 days of the year, and Muslims, for another 10 days.   It is the ONLY religious site I have ever visited (mosque/synagogue/church), in which there are armed checkpoints to enter, as well as armed soldiers throughout the facility. 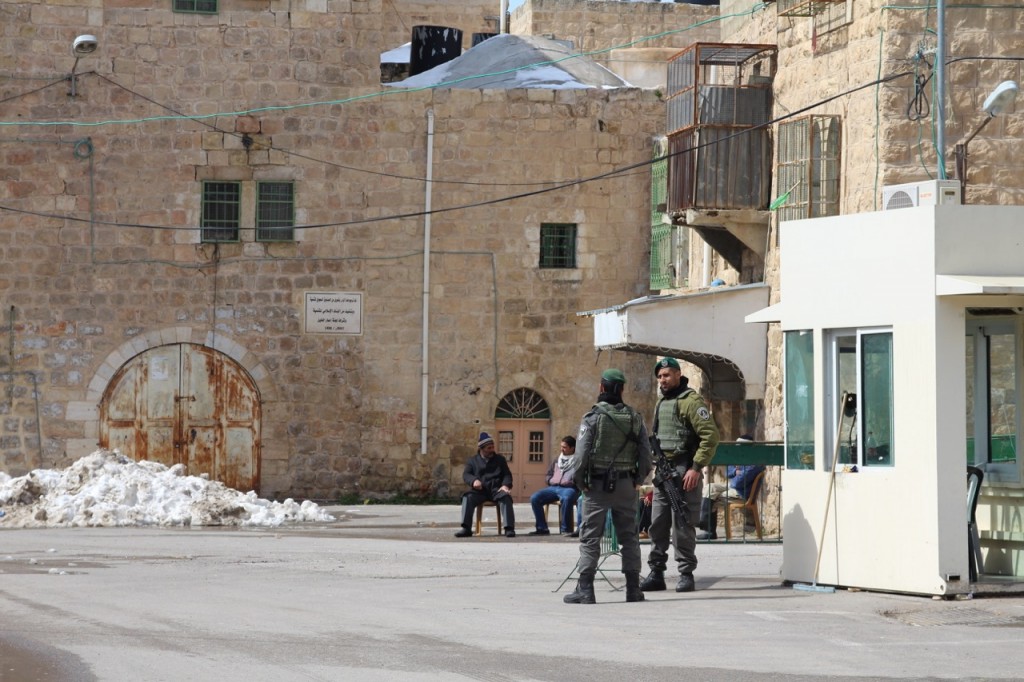 Hebron has several thousand Jewish settlers, dating back to the very first west bank settlement, Kiryat Arba, which began in 1968. The city had a small Jewish population during the British Mandate period, and as the resting place of Abraham and Sarah, has always been an important part of Judea. Until the 1920s, there was relative coexistence, but it all un-raveled in 1929, when 67 Jews were massacred by Arabs, and the Britsh drove the remaining Jews from the city. The city was the site of a brutal murder, in 1994, when 14 Muslims were killed INSIDE the mosque by an Israeli soldier. The 1997 peace accords divided the city into two zones, H1, and H2. H1 is entirely Palestinian, and under Palestinian control. H2 is Jewish, but has a 20% Palestinian population, is entirely under Israeli control.   The history is complex, and I do it a dis-service. So, instead of telling history, I will tell a story. We woke early and walked over to the Abraham Hostel, for our 8am tour. Unlike yesterday’s tour, this one did not involve a tour bus. There were five of us. Roger, myself, Jeffrey from New York, and two people who were on yesterday’s tour: Cheryl (a lawyer from San Francisco) and Sandra from Barcelona.   We walked to the light-rail line and took the train to the central bus station, where we boarded a “settlers” bus to Hebron. This is an ordinary city busy – except – it has BULLET-PROOF windows.

Bullet-proof windows on the public bus.

Yeah, that will set you back a bit in thinking.   Our guide, Eliyahu McLean, took time on the bus to explain the political situation in Hebron, and explained his own background in peace-making, and his extensive efforts at inter-faith work.

An hour later and we arrived in Hebron, got off the bus, and headed into town, where we were met by Mohammed, our Palestinian guide.   We spent the first three hours with him.   Mohammed brought us to a home of a family, where we had a good talk, and where Mohammed provided us with perspective on the issues – from the Palestinian perspective. We met the owner of the home, who told us that his first wife was shot and killed by a settler over a decade ago when she went onto the roof of their 800 year old home.

owner of the home we were in, who told us his wife was shot and killed on the roof-top of the home, when getting water. Seated next to Sandra.

As we walked with Mohammed, I was struck by the military presence at nearly every corner. Whether it was a guard tower, or check-point between zones of the city, or barbed wire above buildings, or metal grates protecting windows, it felt like we were in a war zone.   In a way, we were, but one with a strange sense of normality. The other thing that is hard to fully explain is the unease at being surrounded by soldiers carrying machine guns, that appeared to be about 19 years old. These young people should be in college, but they are placed in one of the world’s hot spots.

We walked for a long while through the Casbah – or the market area – and heard other stories, like how the netting that is above the market is covered in garbage, thrown down on it by settlers from above. From the market you could see guard towers as well.   Seemingly at every corner. Eventually we got to the Mosque, although we had to wait to enter until afternoon prayer was over. We went inside and saw the various religious sites – the entry to the caves (marked by a star), the metaphorical tombs of Abraham, Sarah, Isaac, Jacob, and others.   We then went to a family’s home and had a traditional Palestinian lunch, sitting cross-legged on the floor, on pillows.   The meal was excellent, as has been true of basically all the food.

The Tomb of the Patriarchs — Mosque and Synagogue.

After lunch, we left Mohammed, and returned to Eliyahu, who brought us on a tour of the synagogue, but not until first providing some historical context and then having us spend about 25 minutes with a leader of the settlement, David Wilder. The settler was in a bit of a hurry, and instead of telling us his story, did a Q&A.   Several of our group asked some hard questions based on what we saw – we asked about why settlers would throw garbage onto the market. His response was in classic political spin mode. How do we know what is true? Maybe the Arabs claim this in order to make us look bad.   More interestingly, he described the netting over the markets, as being necessary to protect the settlers above from Palestinians throwing rocks, and grenades… note the competing narrative.   And how both sides claim victimhood.   We asked other questions, do the settlers want peace?   How can you live in a situation where there are armed guards at every corner? When told we all live in a world with security concerns, I said, but we do not have soldiers on the streets in the US. His response was we did after 9/11 (true, for a few weeks, in a few places). The conversation was rushed, and I did not get the sense that anyone was satisfied by what we heard. He was combative and feisty.   He did not give us an explanation, but was determined to deflect every question we asked.   Had this been the only voice we had heard from the Jewish perspective of the settlements I think we would have been quite frustrated. But Eliyahu really did a good job trying to explain the positions that are taken, while not actually claiming to support their arguments. After visiting the synagogue, we walked down the street, and came to a street that was abandoned, like an empty movie set.   We first had to show our passports to some soldiers, and we learned how this area had been the location of a killing of a family, and how the IDF opted to simply close the street to Palestinian access. Indeed, we learned that over the course of a kilometer, several killings had resulted in basically closing off a large area. This was quite surreal. One memorial after another, one more empty street, more soldiers.   Barbed wire.   Cement blocks sealing off city streets. It lookd like a war zone. It, in effect, was a war zone.

We visited the settlement, Avraham Arivu, and visited the new synagogue.   Eliyahu gave us a good talk, and then surprised us by showing us the torah scrolls. This was unexpected, and a bright moment, in a somber day of discussions.   The day continued, and we visited the first Hadassah hospital which now is a museum commemorating the Jewish claims to Hebron, and the history focusing especially on the 1929 massacres.

Our guide, Eliyahu, an interfaith leader, and the person who developed the dual narrative tour

This day is hard to process.   My brain hurts. I saw things that I do not think I every could have imagined seeing. I was in a place where I am in no hurry to return.   I saw the frustration and poverty of the Palestinians (but not poverty at a level I expected), I saw the presence of many orthodox religious Jews, milling around the synagogue. I saw a world where the broken children of Abraham and Sarah fight over land, and political control. I saw competing victim’s stories, but with no ability to assess fact from fiction. I saw Jewish settlers who are determined to stay where they are in the West Bank, even though their very security and freedom is paid for by the larger military force guarding them.

As we were riding the settler bus home (which was jammed packed with people heading to Jerusalem, where I learned most of them work, I was sitting next one of the members of our group, when a young soldier, who could not have been more than 12 (ok, he was probably 19 or 20), boarded the bus, machine gun in hand. (I know you gun people will tell me, it wasn’t a machine gun, well… pooh, it was a machine gun!). But the point is that when he sat down, he jostled the weapon, and it left me with the distinct feeling of dis-comfort, as I simply was not comfortable with a kid sitting across form me with a serious peace of weaponry, whatever it was.   But how differences over nationality, and over religion, can result in such a world, where this is routine, tells me we are in a different place.

I have no solution to the Israeli-Palestinian conflict. I did not come here to find one. I came here to generally collect facts, and to study the competing narratives. The settler narrative is a hard one. It is at the extreme end of the political spectrum, and causes many sticking points for future reforms.   These settlers truly believe they have the right to be where they are – they are in the biblical lands of Judea and Samaria – but if peace is ever going to happen, something will have to give.   I am not sure what that “give and take” will look like in the context of Hebron.

At this point, I have now visited all of the places the US State Department has warned Americans from visiting. I think, in many ways, my mission is done. No, seriously, there is much more to digest, and think about. It might take a long time to truly wrap my head around what I have seen, heard, and observed.

But I sure enjoyed spending the day with this pretty impressive group of people. 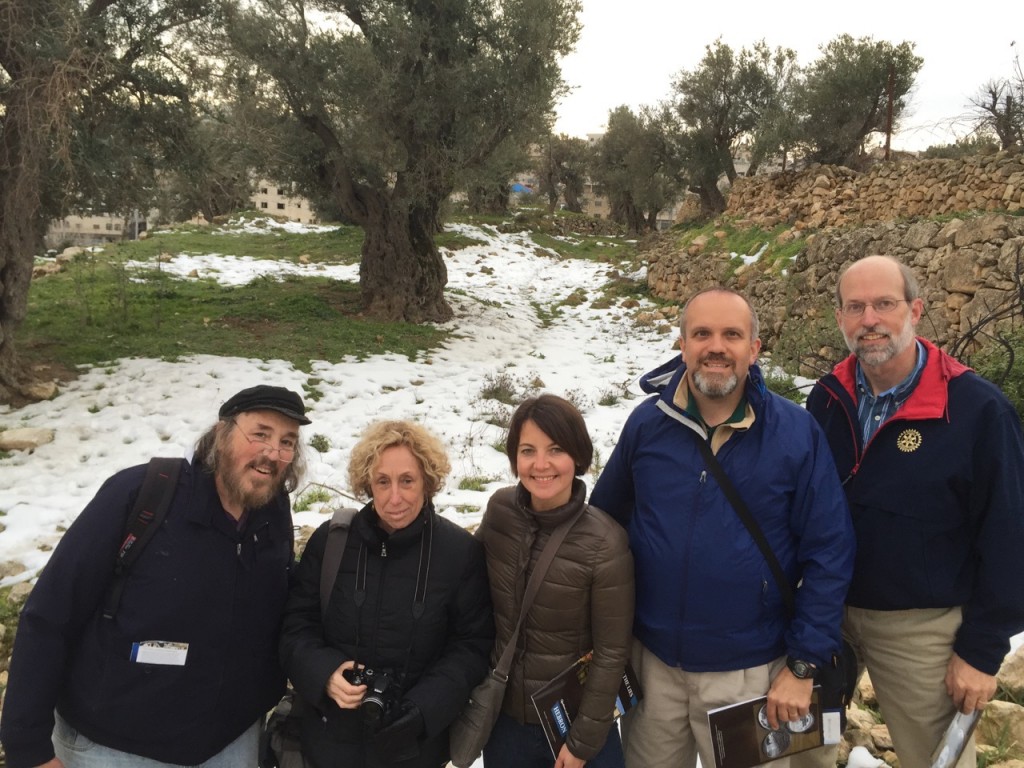