It is more than a little surreal writing this, as I sit in my room in Ein Mahil, Israel.     The travel went as good as it could be for being on an airplane (2 airplanes) for 12+ hours. The Delta flight to Paris was long, but uneventful. After a few fun hours exploring Charles De Gaulle, and speaking a little French, I boarded a sardine-packed Airbus 320 from Air France. 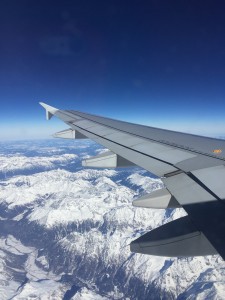 flying over the swiss alps

That was a crowded, tight fitting plane, and was not a lot of fun, but 4 ½ hours later were entered Israel and landed at Ben Gurion. The arrival process was smooth. Answered a few questions as immigration, got my passport visa, picked up the bag, and walked right through customs without stopping.

My friend Roger was in the arrival hall waiting for me, and we caught up, and waited for our host, Raed, to pick us up. Raed is a principal at El Abara school, an elementary school in Ein Mahil.     We drove through Tel Aviv (he missed a turn-off), and then headed north on Route 6, towards Haifa and Nazareth. Along the way you could see the wall and razor wire demarking the West Bank in a few spots.   We then went out to a restaurant in a new shopping area in Nazareth Illit.   The food was great. And it was very reasonable.   29NIS, or about $7.50.     The “Food Piazza” was filled with people, mostly Arabs. It was Shabbat, so not only was there no traffic on the way up, things were quiet.

My first reflection is on perception – and it brings me back to a blog post I wrote after General Assembly, about how perception matters.   My host Raed is an Israeli-Arab citizen, although he described himself as an Israeli-Palestinian. Along the entire drive north, he would point out the Arab villages that we were passing, and more often then not, the names of the Arab villages that were no longer Arab villages, but Israeli cities and towns.   From the Arab perspective, all that is here was here LONG before the nation-state of Israel.

The perspective will change when you talk to others with different backgrounds. On the plane to Tel Aviv, I sat next to a couple from the West Island of Montreal, who were coming to visit friends. They were originally from the Ukraine, and had immigrated to Israel, but left around the time of the second Intifada. The perspective I received from them was very different, particularly from the man, who had strong views.
We are staying in Raed’s home, which is in the village of Ein Mahil, just north of Nazareth and adjacent to Nazareth Illit, and Reineh, another village. The villages having winding streets, tight roads, and my first thought was people drive like crazy-people. (They do!). There doesn’t seem to be much concern for rules of the road.   But more interesting was how at almost 10pm, many of the store-fronts were still open. Fresh fruits and vegetables.   We went to a pastry shop and had what has to be one of the most amazing desserts ever, Knafeh!   Oh, wow. As I write it is Saturday morning, we are going to visit Raed’s school, which is in session, as Arab schools are open, Mon-Thursday, and Saturday.   Then we will tour Nazareth with our friend Bashar, who was one of the teachers who came to Bloomington-Normal last summer, and meet up with some of the teens.   Much more to see and do.