I was extremely leery about this book. What?  Another post super-flu end of the world novel?  Really?  How original could that be?   Brad Manuel’s The Last Tribe looked like yet one more in a long procession of books that came before.  I could not have been any more wrong.

Yes, the book brings to mind a lot of other works:  The Passage, Station 11, King’s masterpiece The Stand, I am Legend, World War Z, The Walking Dead, The Dog Stars, Divergent, The Maze Runner, The Planet of the Apes, and on and on.  AND yes, I have read many of them.  There is something about the genre that is always interesting.  But when I first saw The Last Tribe I was pretty sure this would just be another take on the same formula. And in the first chapter, I was convinced that this was going to be a book that had zero originality. 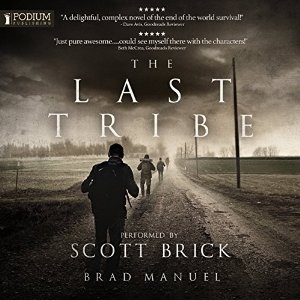 I’ll say it again. I  could not have been more wrong.

The Last Tribe does not have zombies.  It does not really have many “bad guys.”  There are no evil forces at work.  What it has is perhaps unique to the whole genre.  Humanity.  The book tells the story of a group of survivors, several of whom, quite miraculously, are from the same family.  It tells how they come together, and ultimately create “the last tribe.”  The book has incredibly strong character development.  It has several protagonists, and over 700 pages, you come to cheer for all of them.

I don’t want to spoil the story.  I just strongly recommend you buy the book, or the audiobook (Scott Brick, one of the great audio performers of the day narrates it, over 22 hours!).  And then set some time aside, as once you start, you won’t want to put it down.

I am just hoping there is a sequel.

Leave a Reply to Will Mer Cancel reply