This past week has renewed concerns about excessive use of force by police against Black Americans and minorities. Why is it that police seem so quick to escalate encounters with African American males?  Why is it that minorities distrust the police in ways that Caucasians don’t?  Are these problems just a reflection of a few “bad cops,” and not that of the vast majority who are dedicated to “protecting and serving” the communities they work in, or is there a deeper problem in policing?  Are all cops racist?  Is there institutional racism in within policing? All are important questions, but they all boil down to the fact that when police use strategies and tactics that disproportionately target minorities, and when they act differently in two identical scenarios with the sole exception of the race of the individual involved, it is discriminatory behavior. And it is a primary part of the lack of trust that exists between minority communities and the police today.

If there is a true desire to find solutions to the problems of lack of trust in policing, there is one action that each and every police department can take right now.  Immediately. And it is fairly simple. End the use of pre-textual traffic stops. Cease using the traffic code to conduct investigatory stops immediately. The benefits would be substantial.

What are investigatory pre-textual stops?  A pre-textual stop is a traffic stop used as a pretense or excuse to conduct a criminal investigation.  It is a tool that was developed by law enforcement in the 1980s as a way to prosecute the war on drugs. The setup is simple.  Identify a car that you, the officer, thinks looks suspicious, maybe there are young males in it, maybe it is the make and model of the vehicle, but regardless, you have a hunch that you want to investigate this vehicle.  So you look for the most minor of traffic offenses to create the pretext for a traffic stop.  I’m not talking about someone flying down the road 15 miles over the speed limit—that is a legitimate traffic safety issue.  I’m talking about driving with mud on a license plate, a broken license plate light, failure to use a turn signal properly.  Not failing to use a turn signal, but not using it 100 feet before a turn.

Other examples include weaving in the same lane of traffic, and driving down the left lane of the interstate for more than a half-mile, or driving with a parking permit hanging from the rearview window, among many others.  These are extremely minor violations of the traffic code that officers use as a pretext to establish probable cause to stop the vehicle. Once stopped, the officer has “seized” the driver and passengers of the vehicle.  He can question the driver, and all passengers.  Ask for identification, driver’s license, proof of insurance, registration, run the person’s names through the computer for active warrants.   If there is  reasonable suspicion that the driver is armed and dangerous, ask him or her to get out of the vehicle, and do a frisk, or pat-down of the outer clothing for weapons.  Scan the interior of the vehicle—doing a plain view search for weapons, open bottles, and contraband.

But there is more.  The officer is trained to ask provocative questions designed to put the driver on edge as a way to manipulate the him or her to consent to a search.

“Do you have anything on you that would cause me or my partner to blow up?”  Throwing him off guard, the driver quickly says no.  So, they the officer follows up with,

“No? Then you won’t mind if I do a quick search?”  This is psychological manipulation intended to get the citizen to waive his constitutional rights.

All of this is done independently of the “official” purpose for the stop, the issuance of a warning or citation for a traffic offense.  But the traffic violation isn’t really the goal. It is a means to conduct a criminal investigation, something he otherwise lacks reasonable suspicion or probable cause to do.  The officer does not possess the necessary reasonable articulable facts would that lead him to believe that the person is engaged in or about to engage in criminal behavior, so he probes, ask questions, and manipulates the citizen in the hope that he or she will consent to a search.  But in a traffic stop, there is NO reasonable suspicion of criminal wrong-doing, there is only a hunch, and a minor traffic violation, and often, the most trivial of violations.

I began by stating that these investigatory stops were originally designed to conduct the war on drugs.  In the past 20 years they have expanded, as police have institutionalized them into standard practice. The investigatory stop, police training manual author Charles Rensberg tells us, is a type of police traffic stop that “seeks to maximize the number of citizen contacts in vehicle stops during each shift and, through specific investigative techniques, to explore the full arrest potential of each.”  In the town where I live, the police department has an enforcement contact policy.  Each officer is expected to make three citizen contacts a shift, resulting in a citation, written warning, or ordinance violation. They uses investigatory stops all the time.

The use of the pre-textual stop by itself is disturbing. It is a violation of an individual’s constitutional rights to be free from unreasonable search and seizures.  But there is more to the problem.  The investigatory pretextual stop is NOT used systematically against all drivers.  Officers disproportionately use the tactics in contacts with minorities and young people.  My 18 year old son has endured two of these stops in the past 9 months.  One for a license plate light violation (the license plate light had blown out), and the other for failure to use a turn signal properly.  These stops are not just an annoyance, they are a humiliation.  Look at the text message I received from him during the most recent one. 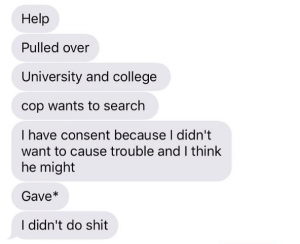 He knew to say no to a consent search, but also believed that it would end up bad if he didn’t comply.   “I didn’t do shit.”

This is not an extreme example.  It happens over and over again.  While my son is Caucasian, he is young.  The reality is that most adult Caucasian drivers rarely experience these stops. If they get stopped by the police it is for a legitimate traffic safety stop.  They were speeding 15 miles over the limit. They were driving at night with the headlights off.  Those are legitimate traffic offenses, in which we NEED police on patrol to keep the streets safe.  And if someone get a speeding ticket, they might not be happy about it, but they know they deserve it. They own it.  “Yeah, I got caught.”  But would they have the same perception if they were stopped again and again for turn signal violations, asked obnoxious questions, and searched?

Yet, this is exactly the reality that exists for minorities.  And minorities experience the humiliations that come from them, over and over again. It was because of racial profiling that several states developed state-wide legislatively mandated traffic stop data collection, in which officers are required by law to record information about every single traffic stop. The data is very clear that when we look at the stated reasons for traffic stops, that minorities, particularly African Americans, are subjected to these tactics far more frequently than Caucasians.

Now, police will make plenty of excuses, claiming that they don’t target minorities. They will insist that they aren’t racist. And to be fair they have been trained, over and over again, that this is good police work, and isn’t racist. They target vehicles that meet profiles, and it just happens that minorities fit many of these profiles.  There are plenty of excuses, and I’ll save them for another essay, but what is important is that Blacks experience pre-textual investigatory stops far more often than Caucasians do, and the end result is that has been a significant drop in trust of the police.  Blacks expect to be stopped.  They expect to be harassed by police. They expect to be treated as second-class citizens. They expect to be subjected to these humiliations.  White people don’t normally have these expectations, because with the exception of very young drivers, and even then only in some communities, they simply do not experience these types of stops.  The end result is that many Blacks don’t trust the police, and when there is a lack of trust, when there is a conflict, there is a much greater likelihood of that conflict escalating.  If I don’t trust you, I’m far more likely to be belligerent. And if the police officer detects “attitude,” he is far more likely to give it back. Over time, it creates a pre-disposition in the officer’s mind that when he stops a Black person, there is a great likelihood of conflict, and perhaps danger.

If we want to make immediate changes to begin the process of diffusing a small part of the tension on our streets, it is in the power of each and every police chief.   Instruct their officers to end the use of investigatory stops immediately.  Demand that pretextual stops be ended.  Make it crystal clear that this is not good policing, nor is it protecting and serving the community when you treat an entire class of drivers differently, often entirely because of their race.  Nor does it matter that the Supreme Court has said this behavior is permissible.  Just because it is legal does not mean it is right.

Define a list of legitimate traffic safety issues, and limit traffic stops to those purposes.  Stop the practice of using traffic stops to do what you couldn’t do if the person was on the street.  And while we are at it, stop the practice of making law enforcement a revenue generation process. Will this potentially diminish drug arrests?  Sure.    But if there is anything the last forty years should have taught us, it is that the war on drugs has been a monumental failure, and needs to end.

Will it solve the problem of excessive use of force? No, this is just one important step.  There is a fundamental need for more training in conflict management, and more training that focuses on the de-escalation of violence.  But ending pre textual investigatory stops will take the first essential step, to restore confidence.  Call your local police chief and sheriff and demand that they end the use of pre-textual investigatory stops now.  And if the police chief or sheriff won’t do it, then the legislatures of every state need to demand they do it.